It is known that Honor is now almost three days far from the launch day of its new Honor 60 5G series. Moreover, as the launch day is coming near, more information regarding the upcoming phone got revealed.

This morning, the Weibo blogger @PengPengJunArrives has revealed the live images of all colors available in the Honor 60 5G series. As can be seen in the photo, the new Honor 60 5G has three color options: Grey-Green Gradient, Blue-Gold Gradient, and Orange-White Gradient. 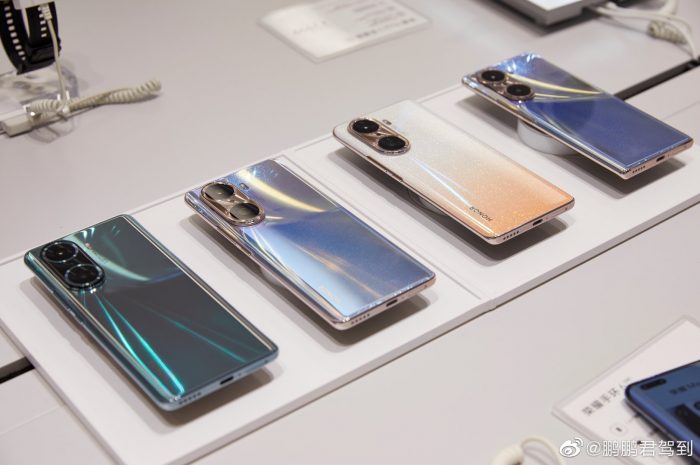 It is worth mentioning that the total numbers of phone (in the photo) are four but the fourth one and the second one are the same color phones. The live images showed that the starry design looks more beautiful and elegant than the appearance shown in the warm-up posters.

Not only that, both devices (Standard and Pro) from the Honor 60 5G series have also been listed on JD.com (Chinese E-Commerce site) which has confirmed that both devices will feature the same single punch-hole curved screen.

Except for the things mentioned above, it was already known that the new Honor 60 5G series would feature a Dual-Ring camera module featuring three lenses inside it; the third lens is placed in between both rings.

Currently, the internal specifications of the upcoming Honor 60 are not revealed. However, it is reported that the Pro model will feature the sub-flagship Snapdragon 870 5G chipset, while the standard model may be powered by the Snapdragon 778G premium mid-range chipset. It is also reported that there would be an additional model, Honor 60 5G SE.