The new series consists of two devices includes the standard version and a Pro version of Honor Play4.

The new Honor Play4 Pro is equipped with a dual punch-hole screen while the standard version has a single punch-hole screen. Both phone displays have the same resolution of 2400*1080p (Full-HD). At the press conference, they had not explained much about the display. Also, they got the same lock button fingerprint scanner.

Inside the phone, the Pro version uses the flagship Kirin 990 chipset, which is previously used on Huawei Mate30 and P40 series. The standard Honor Play4 uses Dimensity 800 chipset. Both the phones support 5G connectivity and dual stand-by.

On the camera side, The Honor Play4 Pro has a dual-camera setup 40MP+8MP on back. The 40MP Sony’s IMX600y, as previously mentioned, is the same sensor used in Mate30. The 8MP is a telephoto lens that will provide 3X optical zoom. The camera also supports four-in-one pixels, laser focusing, AIS handheld, and super night scene. On the front, it has 32MP+8MP, which will provide you front portrait super night scenes.

It is reported that the Pro version got a temperature measurement function. It can detect the temperature in between -20°C and 100°C. It greatly improves the thermal isolation from the high-heating devices on the periphery of the mobile phone effect. Moreover, the standard version uses VC liquid cooling system, provides a 12-layer heat dissipation structure.

The new Honor Play4 series comes with Magic UI 3.1 based on a definite delay engine, a smooth and stable overall experience. The Honor Play4 is available in white, blue, and black color while the pro version is available in Shiny Blue, White, And Black. 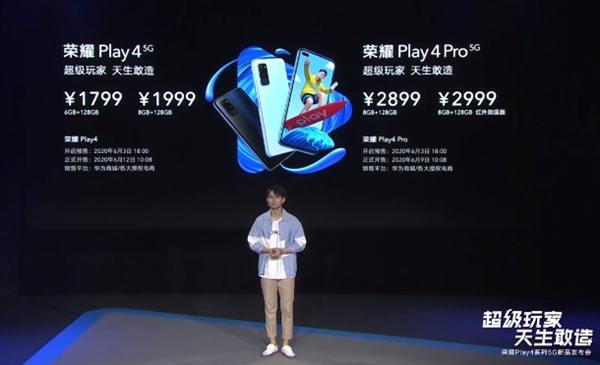