Last year (in 2020), Meizu officially confirmed the existence of its first-ever smartwatch, and the officials also said that it would be launched in the 4th Quarter of 2020 (around Oct-Dec). However, there was no announcement came from the officials regarding the watch.

Recently, at the Meizu 18 series Launch event, the company once again confirmed its smartwatch product and said it would be released this year. And finally, today, the appearance of this watch has been exposed by a teammate (@UncleMobile on Weibo) in China Telecom before any official announcement.

As per the picture leaked by China Telecom, it can be seen that the all-new Meizu smartwatch supports an eSIM card, which means that this can be used separately from a mobile phone paired with a mobile terminal. This is also the current progress of smartwatch products.

Moreover, the appearance of the watch has also been revealed. It is observed that Meizu’s smartwatch is almost similar to Apple’s iWatch, and even if you don’t look closely, it will feel the same, but the watch is round or either rounded rectangle.

The appearance does not conform to the general aesthetics, and it is customary to give the most conservative appearance design to cater to the market.

It is reported that Flyme’s exclusive customized system will power the all-new Meizu Smartwatch. As a well-known OS in the smartphone field, it is unknown what it will be made on watch products. 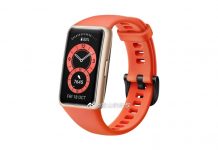