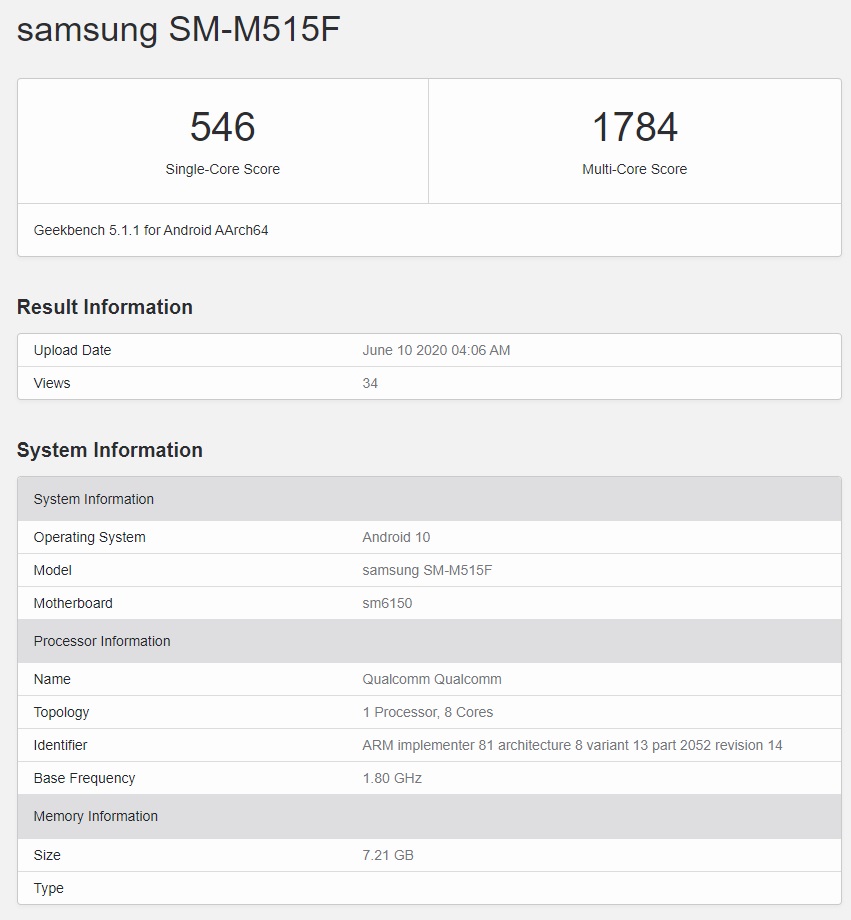 As of now, there is no official release date for the Samsung Galaxy M51 but this device has already made its way to the Geekbench database. The Geekbench running information shows that the Samsung Galaxy M51 (code-named SM-M515F) is equipped with an eight-core Snapdragon SoC and 8GB RAM. In Geekbench 5.1.1, the single-core running is divided into 546, and the multi-core running is divided into 1784. However, the GeekBench score is very similar to that of Samsung Galaxy A71 which uses a Snapdragon 730 SoC. This sparks speculations that this smartphone may also use this chip.

Furthermore, considering that the previously announced Samsung Galaxy M40 uses the Snapdragon 675 mobile platform, there are multiple reports that its successor, the Samsung Galaxy M51, is expected to use the Snapdragon 730 mobile platform. However, there is no official confirmation of the exact chip that this device will use. Unfortunately, the GeekBench listing did not clearly state the chip of this device as usual.

According to previous reports, the Samsung Galaxy M51 uses a 6.5-inch 1080 x 2340 LCD screen. This smartphone will have two models, a 6GB + 64GB version as well as an 8GB + 128GB model. In the camera department, this smartphone comes with a triple rear camera setup. It will have a 64MP main shooter coupled with an 8MP sensor as well as a 5MP camera. On the front, there will be a 16MP camera for selfies. Although we do not know the battery capacity of this device, it is going to support 15W fast charging. It also comes with a rear fingerprint recognition sensor and runs an Android 10-based system. At present, Samsung has not announced the specific release date of the Galaxy M51.