This afternoon, Tao Lin (Vice President of External Affairs) has confirmed that FSD (Full Self-Driving) in China will not increase its prices at present. 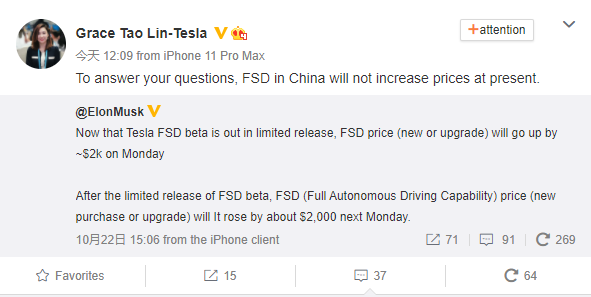 Yesterday, Elon Musk (CEO of Tesla) said on his Twitter that on the upcoming Monday, the price of FSD would rise by 2k USD, from 8k to 10k USD. He also explained the reason behind the increase in prices. The company just pushed the latest Beta version of FSD software to some car owners earlier this week.

Musk also said that the price of FSD is likely to rise further in the future. He said: “As the software obtains regulatory approval and gets closer and closer to achieving fully automated driving, the price of FSD will continue to rise. By then, the FSD’s value may be more than $100,000.”

It is reported that Tesla’s fully automated driving test version has been released officially on 20th October’s Evening in the US, and a small-scale push has been launched. It is also observed that the updated version of Auto-Pilot and FSD (Full Self-Driving) of Tesla’s is based on a complete rewrite of the underlying architecture and has more substantial automatic assisted driving capabilities.

Tesla’s FSD Price Will Not Increase In China At Present

Meizu Watch uses a 420mAh battery, will be released soon

Meizu 18 series will be released on March 3